Given the A linear equation is an equation with variables

with two variables and

with three) that can be written in the form

are real or complex numbers which are usually known beforehand.

are not a system of linear equations because the two equations do not share any variables, whereas adding the equation

makes the collection a system of equation because variables are shared between equations.

that can be exchanged with the variables

such that every equation becomes true. A system of linear equations may have no solution, exactly one solution, or infinitely many solutions.

When solving a system of equations, there are several ways to go about solving it.

For a given system of equations, each equation can be written as a row in a matrix. For a coefficient matrix, each of the coefficients is written in aligned columns. For example, the system

would be written as the coefficient matrix

. The augmented matrix for the above system is 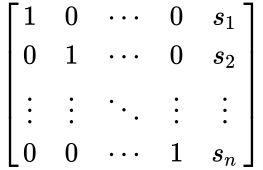 The standard way, also known as the Gauss-Jordon Elimination Method, of solving using row operations is to work from left to right and attempt to make the value in the appropriate row (for example, the first row in the first column) equal to 1, then bring all the other values to 0. This has the advantage of never undoing work previously done. To solve the augmented matrix:

Interchange the first and second rows to get 1 in

Retrieved from "https://math.wikia.org/wiki/System_of_linear_equations?oldid=25568"
Community content is available under CC-BY-SA unless otherwise noted.