A cylinder is one of the most curvilinear basic geometric shapes:It has two faces, zero vertices, and zero edges. The surface formed by the points at a fixed distance from a given straight line, the axis of the cylinder. The solid enclosed by this surface and by two planes perpendicular to the axis is also called a cylinder. The surface area and the volume of a cylinder have been known since deep antiquity.

In common usage, a cylinder is taken to mean a finite section of a right circular cylinder with its ends closed to form two circular surfaces, as in the figure (right). If the cylinder has a radius

, then its volume is given by

and its surface area is:

Therefore without the top or bottom (lateral area), the surface area is

With the top and bottom, the surface area is

For a given volume, the cylinder with the smallest surface area has

. For a given surface area, the cylinder with the largest volume has

Having a right circular cylinder with a height

units and a base of radius

-axis. A plane section at a distance of

units from the origin has an area of

An element of volume, is a right cylinder of base area

square units and a thickness of

cubic units is the volume of the right circular cylinder, by Riemann sums, 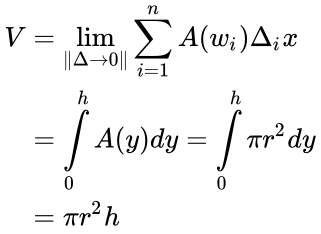 Cylindric sections are the intersections of cylinders with planes. Although these mostly yield ellipses (or circles), a degenerate case of two parallel lines, known as a ribbon, can also be produced, and it is also possible for there to be no intersection at all.[1]

Other types of cylinders

An elliptic cylinder is a quadric surface, with the following equation in Cartesian coordinates:

This equation is for an elliptic cylinder, a generalization of the ordinary, circular cylinder (a = b). Even more general is the generalized cylinder: the cross-section can be any curve.

The cylinder is a degenerate quadric because at least one of the coordinates (in this case z) does not appear in the equation.

An oblique cylinder has the top and bottom surfaces displaced from one another.

There are other more unusual types of cylinders. These are the imaginary elliptic cylinders:

and the parabolic cylinder:

The volume of a cylinder whose base is an inscribed circle is therefore: 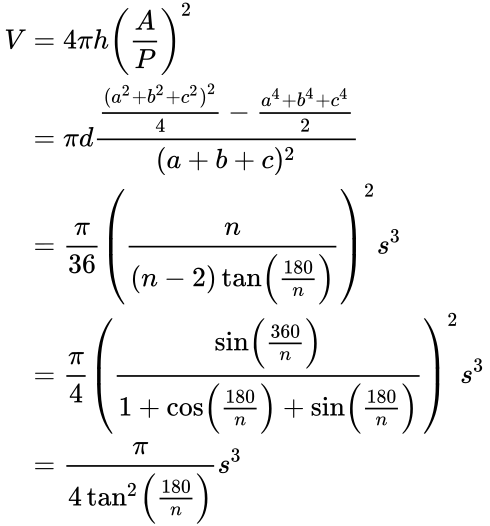 The surface area of a cylinder whose base is an inscribed circle is therefore:

The cylinder with the base radius r and height 2r is known as a circumseribed cylinder whose volume is given as follows:

The surface area of a circumscribed cylinder is given as follows:

Retrieved from "https://math.wikia.org/wiki/Cylinder?oldid=20814"
Community content is available under CC-BY-SA unless otherwise noted.