In geometry, the circumscribed circle or circumcircle of a polygon is a circle which passes through all the vertices of the polygon. The center of this circle is called the circumcenter.

A polygon which has a circumscribed circle is called a cyclic polygon. All regular simple polygons, all triangles and all rectangles are cyclic.

All triangles are cyclic, i.e. every triangle has a circumscribed circle.

In coastal navigation, a triangle's circumcircle is sometimes used as a way of obtaining a position line using a sextant when no compass is available. The horizontal angle between two landmarks defines the circumcircle upon which the observer lies.

The circumcenter's position depends on the type of triangle:

are the lengths of the sides of the triangle and

is the semiperimeter. The radical in the second denominator above is the area of the triangle, by Heron's formula.Template:Ref

In any given triangle, the circumcenter is always collinear with the centroid and orthocenter. The line that passes through all of them is known as the Euler line.

Circumcircles of triangles have an intimate relationship with the Delaunay triangulation of a set of points.

The circumradius of a regular n-sided polygon is:

The following content is either copied to or copied from Wikipedia. One source or the other should cite the original content.

In the Euclidean plane, it is possible to give explicitly an equation of the circumcircle in terms of the Cartesian coordinates of the vertices of the inscribed triangle. Thus suppose that

are the coordinates of points

. The circumcircle is then the locus of points

in the Cartesian plane satisfying the equations 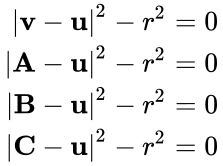 guaranteeing that the points

are all the same distance

from the common center

of the circle. Using the polarization identity, these equations reduce to a the condition that the matrix 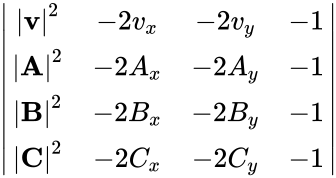 have a nonzero kernel. Thus the circumcircle may alternatively be described as the locus of zeros of the determinant of this matrix: 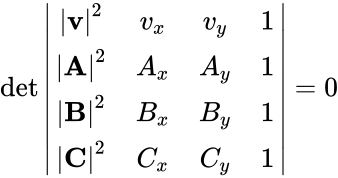 and, assuming the three points were not in a line (otherwise the circumcircle is that line that can also be seen as a generalized circle with S at infinity),

. A similar approach allows one to deduce the equation of the circumsphere of a tetrahedron.

An equation for the circumcircle in trilinear coordinates

An equation for the circumcircle in barycentric coordinates

The isogonal conjugate of the circumcircle is the line at infinity, given in trilinear coordinates by

and in barycentric coordinates by

The Cartesian coordinates of the circumcenter are

Without loss of generality this can be expressed in a simplified form after translation of the vertex A to the origin of the Cartesian coordinate systems, i.e., when

. In this case, the coordinates of the vertices

represent the vectors from vertex A' to these vertices. Observe that this trivial translation is possible for all triangles and the circumcenter coordinates of the triangle

Barycentric coordinates as a function of the side lengths

where a, b, c are edge lengths (BC, CA, AB respectively) of the triangle.

Barycentric coordinates from cross- and dot-products

In Euclidean space, there is a unique circle passing through any given three non-collinear points P1, P2, and P3. Using Cartesian coordinates to represent these points as spatial vectors, it is possible to use the dot product and cross product to calculate the radius and center of the circle. Let

Then the radius of the circle is given by

The center of the circle is given by the linear combination

Hence, given the radius, r, center, Pc, a point on the circle, P0 and a unit normal of the plane containing the circle,

, one parametric equation of the circle starting from the point P0 and proceeding in a positively oriented (i.e., right-handed) sense about

The angles at which the circle meets the sides

The angles at which the circumscribed circle meet the sides of the triangle coincide with angles at which sides meet each other. The side opposite angle α meets the circle twice: once at each end; in each case at angle α (similarly for the other two angles). The alternate segment theorem states that the angle between the tangent and chord equals the angle in the alternate segment.

Triangle centers on the circumcircle of triangle ABC

In this section, the vertex angles are labeled A, B, C and all coordinates are trilinear coordinates:

Retrieved from "https://math.wikia.org/wiki/Circumscribed_circle?oldid=19135"
Community content is available under CC-BY-SA unless otherwise noted.